OYAN Review: Spring 2019
In this issues, learn about…
Thank you so much to everyone who contributed an article — it’s really fun to get to share your accomplishments and experiences!

On Thursday April 16th, I was fortunate to present Aimee Meuchel with the OYEA award for excellence in teen services.  I’ve known Aimee for many years and to say she is deserving of this award is an understatement.  Aimee is a fierce advocate for teens and teen services and is constantly trying to improve the lives of the teens that walk through the doors at Tualatin Public Library.  She’s a creative programmer, a voracious reader of YA lit and simply an easy person to talk to – something many teens need more than anything else.  But don’t take my word for it, here are some quotes from her supervisor and teens.

From Jerianne Thompson, her Director:

Aimee strives to develop programs that are engaging and interesting to teens; the consistently high attendance at these programs proves her success.  Between July 2014 and February 2015, the Tualatin Library presented 153 programs for teens, with a total program attendance of 1688.  These programs have included after-hours book-themed parties (Divergent and Hunger Games), an after-hours medieval murder mystery called A Knight of Murder, a mini maker Faire during Teen Tech Week, Kaleidoscope Run (a “color run” presented in partnership with the Youth Advisory Council), crafting programs like Ugly Dolls and Mechanipults, gaming tournaments, Teen Top Chef (promoting healthy eating and active living), an Unlucky in Love party on Friday, February 13, and monthly programs like Animanga.  The weekly Teen Movie Night has recently grown to 40+ teens attending every Friday.  These programs offer teens not only fun but an opportunity for social interaction and teamwork.  Aimee also contributes to other youth programs, including presenting a weekly preschool storytime and partnering with the Children’s Librarian to present a week-long Create & Animate Camp for tweens last summer. 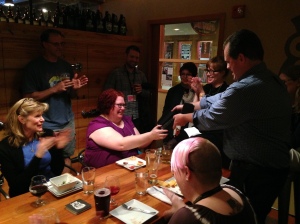 Aimee positively impacts (teen’s) lives.  She has helped teens dealing with any problems with school, stress, and boredom by always being her cheerful self.  I personally have always been troubled with meeting new people and interacting socially in group settings.  I once tried to avoid anyone I could (because of) the embarrassment of trying to talk to others until I met Aimee.  She was very open and welcoming to me and always tried to make sure I kept a smile on my face.  She helped to reassure me to be ok with talking to other teens and challenge myself to go to more social events around the community.  She encouraged me to go to more teen programs around the library, and there I have met many amazing people that I am happy to call my friends.  It was because of having Aimee around to cheer me up that I was able to find confidence in myself and in my abilities of making a difference in my community.  I would never have become the person I am today if it weren’t for talking to that special little red-haired librarian.  Today, I am proud to be working on the Teen Library Committee with Aimee and she has shown great commitment in keeping the teen programs here fun and exciting.  Aimee is with no doubt an amazing person and a spectacular librarian.

I met Aimee my first summer of volunteering, I was incredibly shy, and not one to take leadership roles head on.  However, Aimee recommended that I apply to join the Teen Library Committee to work on my leadership skills and work with other volunteers on large projects.  It was because of Aimee that I began to actively seek out leadership opportunities and become more involved with my community.  Without her guidance and support throughout the years, I would have never grown out of my shell or realized how much I enjoy helping others.  Because she taught me the value of a good and strong work ethic, I improved in school, and was not daunted by higher level classes. Her guidance has been invaluable, she is one of the kindest people I have ever met, and I am very blessed to have had the pleasure of working with her, and she deserves all the best in the world.

As you can see, Aimee engenders strong feelings with those teens that she works with.  Aimee was made to be a teen librarian.  I’ve stolen many an idea from her and I use her as a benchmark all the time to guide me in how I approach teen services.  She is an incredibly worthy recipient of this year’s OYEA Award.

Check out the Spring OYAN Review!

You will find program ideas on making stop-motion videos, starting a crafting club, and providing early literacy programs for teen parents. Plus insights to letting go of your teen council, meet the new OYEA Award winner Aimee Meuchel, an interview with author of Jackaby, William Ritter, and much more.